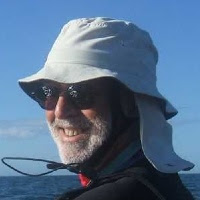 As far as I can tell, Harvey’s last trip (report here) with us, on 04Aug2008, was also his most successful, as it was on this trip that he bagged his first decent snapper. Shortly after this he became seriously ill, which put a stop to his kayak fishing career, but, fortunately for us, not to his interest in Noosa Yakkers.

It must have been in May 2009 when Harvey, while battling to overcome the life-threatening disease which had buggered up his life, emailed the rest of us Noosa Yakkers and announced that he’d set up a blog for us. In time Harvey's blog (same address as our main blog now) became Noosa Yakkers’ link to the outside world, and became sprinkled with comments, images and video links. It also contained an email link which allowed interested parties to enquire whether they could join us. Harvey continued to look after this blog until now, and was closely involved in planning the recent changes which were made to incorporate that blog into the others which became necessary as Noosa Yakkers grew.

Harvey has decided (March 2012) to cease activity with Noosa Yakkers. But he still lives nearby and mixes socially with some of us. This permanent post is Noosa Yakkers’ lasting symbol of gratitude to Harvey for his positive input into our little group. Thanks Harv!