This mat, sold only to Noosa Yakkers, and first announced in late 2014, is something to brag about itself. For a start, it's 160cm, that's 1.6 metres, long. We can measure stormin on this mat! Redwood? No!

The first batch of the mats have been in full use since March 2015 and they've had lots of use, especially by those of us who have been bagging the biggies in the last few months, as you'll have noticed from the pics on our Facebook Group and in TR. And in case you ask, there have been no complaints and no improvement suggestions so it seems we have the perfect yakking product.

Unlike other brag mats we've seen, all gradations (down to 1cm) run almost the full 40cm width of the mat, thus making it easy to read the length to the tip of the tail of a big fish, like the big Spaniard on the mat further down on this page.

The mat has a 50mm plastic right angle extrusion, 40cm long, at the left end, thus making it easy to line up the nose of bigger fish with the zero mark. It also has a quick check 40cm measure on the back, visible when it's rolled up as well as sewn-on elastic straps to keep it tidy when not in use.


This mat will lie patiently and flat on the beach awaiting your fish. No more holding the corners down or piling sand on the corners to stop the mat doing the old auto-rollup trick. The material is tough but limp.

This mat has been designed by the Noosa Yakkers team for yak fishers. It's easy to clean, stow, wash, and is virtually guaranteed to attract fish holders as soon as you roll it out on the beach. Just take care you don't get trampled as they rush with cameras in hand to get a look at it.

What does it look like with fish on? Bloody fantastic.


A couple of other examples: 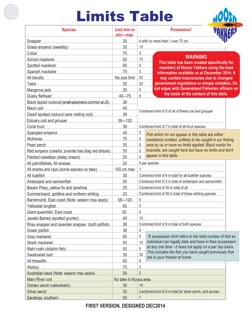 The cost? Only about $30 (dependent on the AUD/Yuan conversion rate at the time of ordering).

And for only another ~$5 you can grab a 20x25cm Noosa Yakkers-designed waterproof Limits Table detailing the limit rules for all relevant Noosa area fish. The Limits Table is made from the same durable vinyl material as the Brag Mat and has a brass eyelet in one corner for securing almost anywhere in your kayak. These have also sold well and have all but stopped the radio enquiries we used to get while on the water like "What's the bag limit on grinners?".

The initial order of brag mats in December 2014 was well received. If demand continues, we’ll order more each year but we need a minimum number of ten per order. Like one? Just email the Group or post on our Facebook Group and a committee member will contact you.