Base pic: New Noosa Yakker ScottyD out at Jew Shoal on his first trip with us on 30March14
PUBLISHED 04APR14

As you may recall I as away helping sail a 40 footer around Bass Strait for much of March. Even though such boats have many comforts the sheer amount of effort to get it up and running made me hanker for my yak, far away in Noosa. But before long I was safely back from the frigid south and itching to get onto the briny and hopefully the fish. The chance came on 30 March and before long I was paddling out toward Jew Shoal with several other of our members, including scottyD. Now scotty was out on his first trip with us and on his first trip offshore. He stuck around with me, as invited until he got out to the shoal and then I gave him a quick orientation and let him off the leash. Sad to relate, he didn't catch any fish that day (several others had the same score) but he did have a big smile on his face whenever I spotted him trolling past in his new Stealth Evo. Eventually most of us pulled the pin and headed in to find that the sand monster was stalking yakkers at Middle Groyne. Aware that scotty had never done a beach return before I sidled up to him while we were both out the back to offer advice. This offer he accepted gratefully I think and we sat just outside the break area and together counted the waves in the sets and watched the biggies go under us and break with a roar on the beach side of us. It was his call first and he went, and got through easily, as did I a couple of minutes later. On the beach as we talked I could see that he was still pumped up and rightly so: he had a 100% record on beating the sand monster. I hope his record continues and one day in the future he'll be able to guide another yakker on his first return to the beach past the Middle Groyne sand monster. Well done scottyD and welcome to Noosa Yakkers!

As an aside, this Noosa Yakkers News marks the start of its third year of publication. If you're interested, take a look at the Blog Archive at right (maybe scroll down a little) and you'll find all 24 previous issues there, each with a summary of our activities for every month: an interesting history, I think.

Largest so far this season was Jaro's 1.26m. Fish caught on HLP, trolled baits and slugs. All were caught in Laguna Bay.

Well, the rains finally arrived and the wind subsided considerably but still not a great deal of action on the water for March, with six recorded NY trips plus the Stealth Adder Rock comp.

Scater started off the month on a Sunday solo outing in a fresh breeze and 1-2M swell. He was well rewarded by taking a reported 1.16m Spaniard around Granite Bay on a trolled pillie and safa rig combo. There was a little controversy on this one whether it was a Grey or a Spanish, but the good folk at AKFF called it a Grey because of the lack of prominent bars, smaller teeth and big shoulders.

Scater breaking his spanish-from-a-yak duck and also christening his new Profisha hatch with some Mackerel juice.

A week later there were no NY trips and for good reason, the weather was challenging to say the least as many found out at the annual Adder Rock kayak fishing comp. 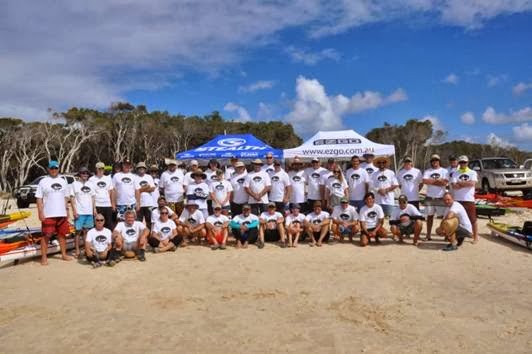 The event is in its second year and by the excellent turn out of around 40 yakkers from all over Australia, looks set to continue into the future. Thomas, Dennis and the crew ran a fantastic event and I'd encourage all NYs to consider it next year. The event also cracked a mention on the Stealth Facebook page and why not? The Australian event is starting to rival the ones held in South Africa and elsewhere for numbers.

Despite the very windy conditions two sessions were held on the Saturday but unfortunately the Sunday session was cancelled as the organisers deemed the conditions too dangerous. That was a shame for the comp but a massive bonus for the Sunny Coasters, because using a variation on the Duckworth Lewis system, the Fishworth Less system, meant that the Sunny Coasters could not be caught and the gold gong belonged to them. Sprocket the Rocket took the overall individual honours as well as the most species caught. 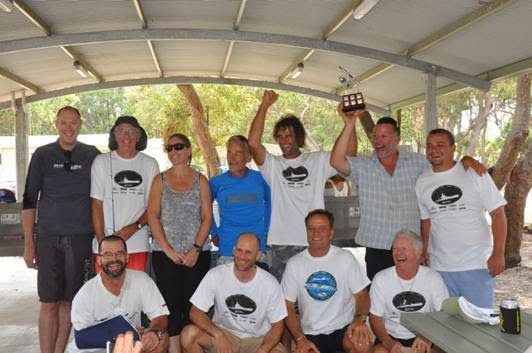 The Sunny Coasters (with Tom and Dennis)


Official Stealth video of the event

Again another week went by before the next outing, this time a sneaky river run by Tunny, Peter and yours truly. This was my last attempt at some kind of fishing that wouldn't damage my tendonopathy (torn forearm tendon), but alas, even river fishing in a pedal power Hobie was too much for it. This trip despite the poor tide and lunar timing was good fun, despite the gale force winds, with a number of strikes and hookups that unfortunately turned out to be mostly the dreaded Hairtail. Peter, a non NY in a DIY fishing yak, did land an undersized Potato Cod and I picked up another Big Eye Trevally at my favourite spot down at the river mouth. I also got smashed by something ferocious just past Munna Point bridge which because I was rounding a corner and my line was trailing around the bend, pulled me into a boat and tangled my lines up. I was able to sort myself out thanks to the mirage drive and get myself into a decent fighting position, but the hooks pulled. I think I may have lost a nice Jack there.

The Noosa River Looking South East to the headland reserve with the Woods Bay in front. You can tell by the chop that the wind was up a bit.

Two trips took place a week later with a small flotilla heading out into Laguna Bay for what turned out to be a nice paddle. No fish caught even though the conditions looked favourable. And, Gemini headed out for a fresh water fish on Ewan Maddock dam. The trip only yielded a few small bass but I'm sure Gemini enjoyed it none the less as he'd not been out for almost two months.

This is where things start to get a bit more interesting fish wise as the next day Doctor Dog scored himself a 1m+ Longtail between the river mouth and Little Halls using an easy troll lead head gang of 3 x 6/0 hooks with swivels between the hooks. As the big rains only came a few days later, we can speculate that washout from the river wasn't the game changer here, rather lady luck and/or superior fishing techniques most likely the main factors here. Nice one Doc Dog!

Yes kids, that's what it looks like before going into the can. Doctor Dog's 1M+ Longtail Tuna.

230mm over three days is a fair amount of water, certainly enough to flush the river into the bay, and so on the 30th we have out last trip for the month with nine yakkers heading out to Jew Shoal for what turned out to be a good session. Aussie-Stu took a cracker Grassy on a SP...

...Sunshiner, the squire whisperer, bagged a 41cm and 46cm specimens also on SPs...

< ...and Tarzan and his brother Aden nailed it using pillies...

And that's it for the Fishing Report for March. The traditional pelagic season is coming to an end as the reef season eases in. Good luck out there for April, I wish I was joining you.

It's membership time again my friends, and that means bottoms on seats… yak seats. Too corny? Probably. :)

It's been another slow month membership wise. We've had a few unfortunate losses, and only one new inductee, so our total now sits on 105. It's also good to see the Noosa Yakkers Facebook page [must be logged in with Facebook to view it and join] being used on a regular basis, and we now have 38 of our crew signed up to it. For those who don't feel up to writing a big report for the blog, the Facebook page is an easy alternative to post a picture or a message about your fishing adventures for the Facebook viewers to read.

Now, over to our new member for the month, who gets to strike a pose all on his lonesome…

Scott is a 22 year old glazier from the bay side of Brisbane. He has been kayaking for around eight years, but only seriously for two. He is currently the proud owner of a Stealth Evolution 430, and two Fish Bandits.

No record fish this month but some nice fish caught anyway.

The Committee (in callsign order)

Hey Tim,
Great fishing report. Lots of pictures and the inclusion of video clips makes for good reading/viewing. Turtleboy might have problems getting his job back if you keep this up.
Jimbo